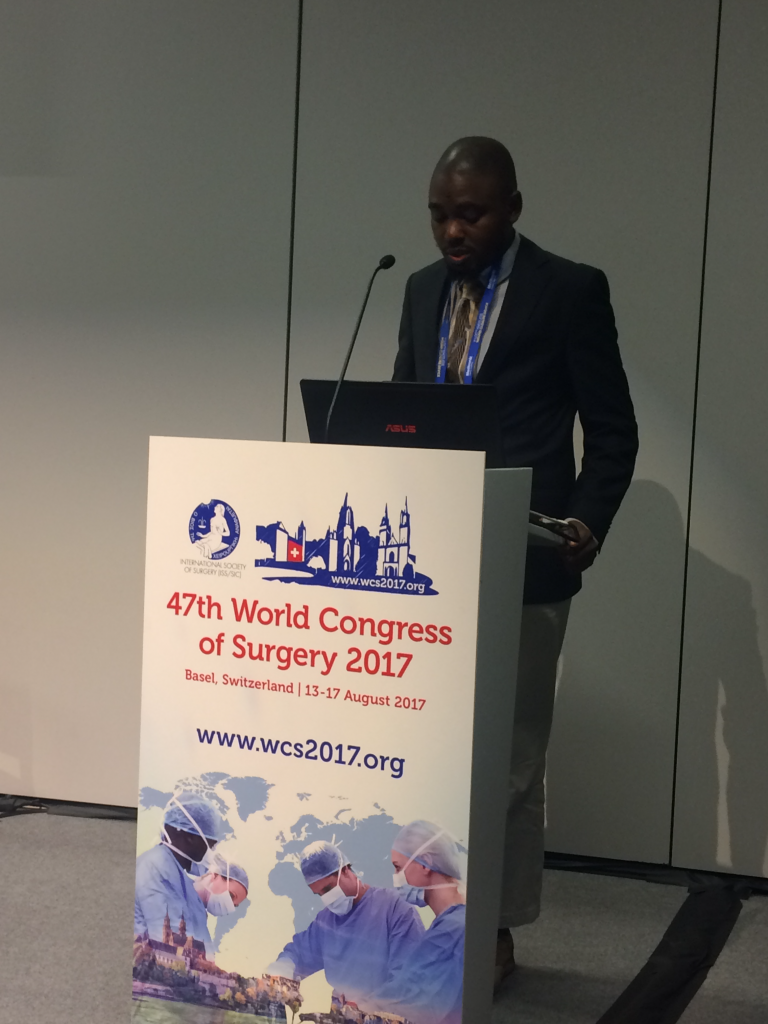 Dr. Nurudeen Abdulraheem presenting the results of PaedSurg Africa for the first time at the 47th World Congress of Surgery (Basel, Switzerland, August 2017)

I first came across PaedSurg Africa in September 2016 at the Pan African Paediatric Surgical Association (PAPSA) conference, Lagos 2016. The study protocol was a podium and poster presentation by the Research Lead for PaedSurg Africa, Naomi Wright. I became interested, registered my interest and dropped my contacts.

University of Ilorin Teaching Hospital (UITH) is one of the tertiary centres in North Central Nigeria and has three accomplished Paediatric Surgery trainers with varying number of trainees at any given time. All the three trainers and four of us trainees attended the conference. I alongside two of my fellow trainees and the three trainers registered to participate in PaedSurg Africa. A total of six participants in a centre means that we had two separate groups of data collectors hence we collected data for two months, November and December, 2016.

The requisite local ethical approval was applied for and obtained within two months. This was subsequently submitted online to the PaedSurg Africa and access to the Redcap online application was provided. We decided to print the forms on papers for ease of data collection and subsequently uploaded them online as each was completed.

In December, 2016, I presented the concept and protocol at an online Global Initiative in Children’s Surgery (GICS) Research Webinar to leaders of Global Paediatric Surgery from around the world. Then in August, 2017, I had the privilege of being the first person to present the results of this groundbreaking research at the World Congress of Surgery (WCS), Basel, Switzerland (pictured above).

Dr. Badmus, K. O – Was not part of the registered co-researchers but very instrumental to filling the data on the printed forms prior to uploading them.

Dr. Abdu-Rahman, L. O – Though he is part of the 6 that made the two groups of data collectors for our centre, his doggedness in ensuring timely delivery our mandate is worthy of mention.