TRIUMPH – Against All Odds (TINO MUDARIKWA)

TRIUMPH – Against All Odds (TINO MUDARIKWA)

“Rare diseases are rare, but rare disease patients are numerous.”

The quote, originally from the Orphanet website, has always resonated with our blog author today, Tino Mudarikwa, who has lived with a rare disease all of his life: imperforate anus (IA) – one of seven conditions Global PaedSurg will be investigating.

Growing up, Tino had always felt alone and isolated, yet it was on Facebook where he found a group of people just like him, and where he met fellow sufferer of IA Greg Ryan, now founder of the ONE in 5000 Foundation. Inspired by this community, Tino is now standing up for rare diseases, hoping to inspire others and championing for those so easily marginalised, especially in rural communities.

He has now founded the Rare Diseases and Disabilities Africa (RaDDA) Foundation (website pending), a non-profit organisation seeking to offer a beacon of hope and awareness to those that need it most. Already it has begun work with the Government of Zimbabwe to improve the current situation.

Read below learn more about his story and how you can help. 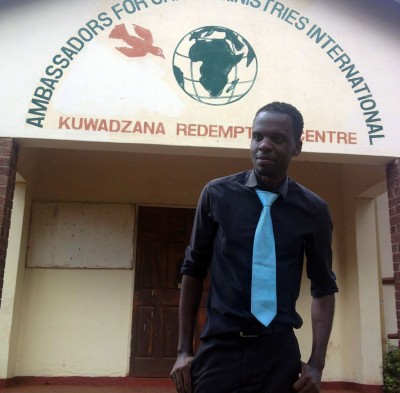 “Growing up in Sub-Saharan Africa, Zimbabwe, family and society had convinced me to believe that I was cursed by ancestral gods, in my mother’s womb. I learnt to accept that I was a black sheep, an ugly smelling duckling who will die an outcast.

Well, just about a year or so ago, I came across a Facebook page – Living with IA – that liberated me from the psychological prison I was in all my life. It was consoling and comforting to learn that there are other folks out there who were born with my exact same condition, some even with worse case scenarios.

Since birth, I have had difficulties in going to the toilet which is something that has affected my academic, social and economic life.  I have had to fight the ailment psychologically from within although it has been hard to mix and mingle with different people.

DISCRIMINATION
Growing up as a child, going to school was very difficult. Due to the faecal incontinence caused by IA, I did not know, or could not control when stool would come, so I had frequent accidents (messing and soiling myself). As a result, I was always smelly which caused me to be anti-social. Often, I would have to change my undergarments and I had no one to confide in or understand what I was going through at that time. I had no friends and other pupils used to call me all sorts of names. I remember they nicknamed me “stinking guy”. I was the last person people wanted to sit with in class.

Generally people in our society and those who suffer from such ailments believe that it is as a result of witchcraft, evil spirits. I have also discovered that people who suffer from such rare diseases and disabilities lack the communication and education to open up about their medical problems. Many do not have access to information, because such rare ailments lack exposure, those affected tend to remain silent and die quietly.

Rare diseases only affect a small amount of people unlike HIV and AIDS, cancer, cholera and malaria.  More resources and media exposure are given to the diseases that affect the masses, but this phenomenon HAS to change.

There is need for DISSEMINATION OF INFORMATION to such people who are marginalised and are in rural communities.

To fill this gap, I have successfully registered a non-profit organisation called the Rare Diseases & Diabilities Africa Foundation (RaDDA) Foundation. In addition, the Government of Zimbabwe through its Ministry of Health & Child Care is currently drafting a Memorandum Of Understanding between them and RaDDA Foundation to support this cause and recognise Rare Disease Day OFFICIALLY in the country.

In no time “Rare will not be so Rare”.

I appeal to prospective, potential and strategic partners/donors/well-wishers to not hesitate to contact me via: